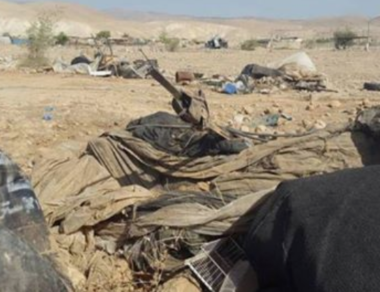 Israeli soldiers invaded, Thursday, invaded Susiya village, in Masafer Yatta, south of the southern West Bank city of Hebron, and demolished a residential tent for the second time in less the two months.

Rateb Jabour, the coordinator of the Popular Resistance Committee in southern West Bank, said the soldiers invaded the village, and demolished a residential tent, owned by Hussein Radi Nawaj’a, before confiscating it.

Jabour added that this is the second time the soldiers demolish and remove the residential tent, and said that the soldiers threatened to “revoke his work permit,” if he installs it again although it is on his own land.

The army prevents the Palestinians in Masafer Yatta from living on their lands, in addition to denying them the right to dig wells and install tents, under the allegation that the lands are “for military training,” in addition to declaring them as “state lands.”

It is worth mentioning that Masafer Yatta is one of many areas in Hebron, subject to constant violations by both the soldiers and the illegal colonialist settlers. Such violations include uprooting trees and bulldozing lands, in addition to physical assaults against the Palestinians.