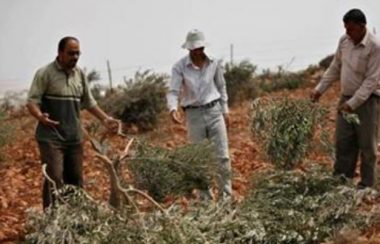 A number of extremist Israeli colonist, from the Ma’on illegal outpost, installed on illegally confiscated Palestinian lands southeast of Yatta, south of the southern West Bank city of Hebron, invaded at dawn, Palestinian farmlands and orchards, before uprooting olive saplings and spraying crops with toxins.

Rateb Jabour, the coordinator of the Popular Committee against the Annexation Wall and Colonies in the southern part of the West Bank, said that Israeli assailants cut and uprooted dozens of olive saplings, planted by Palestinians in their own lands, nearly two years ago.

Jabour added that the attackers also sprayed toxins on many plants in the invaded Palestinian lands, before fleeing the scene.

The invaded farmlands and orchards are owned by Fadel Jibrin Reb’ey and his brothers.

The attack is the latest of ongoing assaults and violations in the area, especially since the illegal colonists are trying to expand their outposts, and colonies, built on privately-owned Palestinian lands.