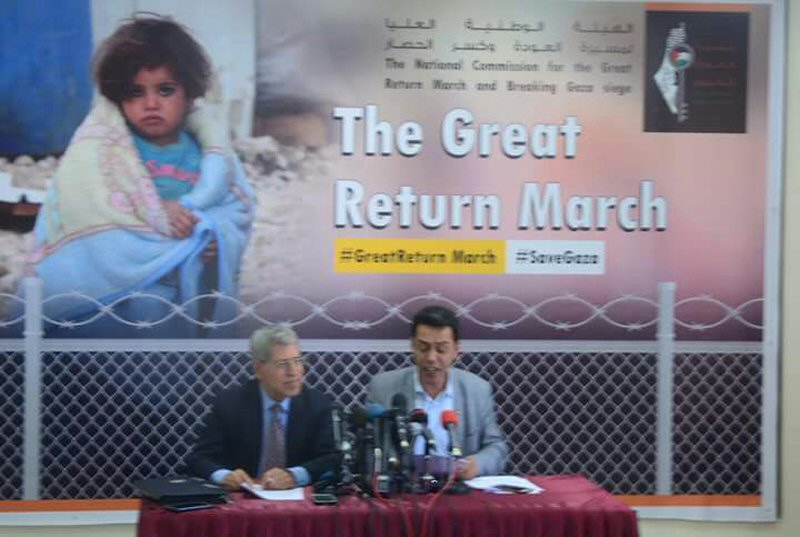 In a press conference, on Wednesday, at the Palestinian Ministry of Information, the Higher National Commission of the Great March of Return and Breaking of the Gaza Siege appealed the international community, at all levels, to urgently intervene on behalf of the Palestinian people in obtaining their basic human rights, and ending the dehumanizing and unjust siege on the Gaza Strip.

“On 30 March, 2018, we, the Palestinian people in Gaza, launched a wide scale peaceful campaign: The Great March of Return in order to obtain our basic human rights, namely our right of return and to live in honor and dignity، by breaking the siege on Gaza,” the commission said.

‏It added: “For the last seventy years, we have been trying to achieve our right of return to our homes and property from which we were displaced when “Israel” was established, or, what we call it: ‘The Nakba’.”

The commission stressed that the Palestinian right of return has been guaranteed by the international law and reaffirmed by UN resolution 194, Amnesty International and Human Rights Watch, saying, “For decades, we have been suffering from the misery of homelessness and persecution of Israeli occupation.”

‏The Gaza Strip has also been suffering a 12-year Israeli-imposed siege which is illegal, immoral, unjust and dehumanizing. In 2003, Baruch Kimmerling described Gaza as: “the biggest concentration camp ever,” the commission pointed out.

The commission concluded, according to Al Ray, by appealing to the world and encouraging them to stand by the Palestinian people in attaining their freedom, independence and self-determination, and to call for the immediately lift the brutal siege imposed on the region.