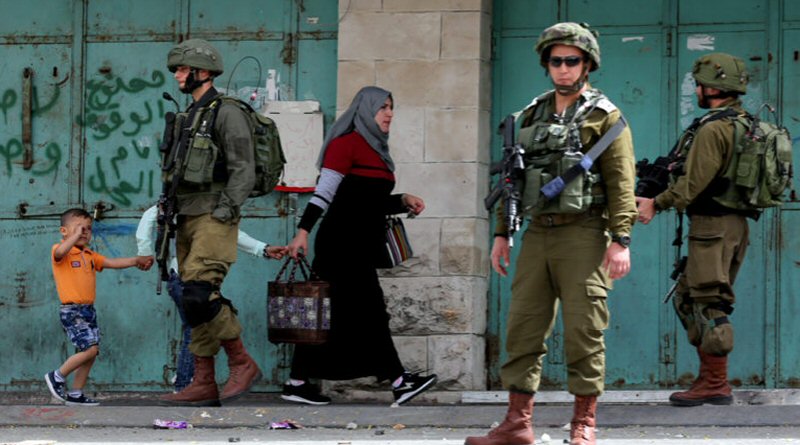 Confrontations between young men and the occupation forces in the center of Hebron, April 20, 2018. Photo credit: Mashhour Wahawah for WAFA.

Israeli occupation forces and settlers continue to commit human rights violations against Palestinians in the West Bank district of Hebron.

On April 8, 2018 the Israeli army invaded the Bedouin village of Zanouta. They demolished an elementary school with six classrooms that served over 40 children. The Palestinian Education Ministry built the school a month ago because children in Zanoba have to travel long distances to other villages to attend school. The coordinator of the education department in Hebron issued statement that condemning the demolition. Locals called it a grave violation of children’s right to education and part of Israeli policies to confiscate land for settlements.

The elementary school in Zanouta before it was demolished, March 2017. Photo credit: WAFA.

After the demolition, students set up classrooms in tents where their school once stood. A week later, on April 15, soldiers invaded area yet again and confiscated the children’s tents, desks and chairs. Military officers ordered the children not to study in tents there.

On April 8, Israeli authorities delivered military stop-work orders to two houses in Saffa village. Ahmed Ikhlail was ordered to stop building his 120 meter square house and Jamal Issa was ordered to stop building his 7 square meter home. Israeli authorities claim the two men do not have Israeli building permits for the construction. Locals say that Israeli forces have demolished many homes in recent years. They view escalating demolitions as a consequence of the expansion of Kfar Etzion settlement.

On the same day, dozens of soldiers invaded the Asidaa area of Beit Ommar. There, soldiers shot tear gas at the Zahert el-Madayen School. Many passersby and students required medical attention for tear gas inhalation. The soldiers stopped human rights activists Mohammed Awad while he documented the raid and told him to leave the area. Then the soldiers closed the main entrance to the town with an iron gate.

On April 18, residents of el-Adisa and Beit ‘Anun woke up to discover that their villages had been closed with roadblocks by Israeli soldiers. Residents expressed shock, saying that nothing had happened recently besides everyday life in the village. The closures trapped two thousand residents in their villages and isolated them from the rest of the West Bank. The closure of the entrance to Beit ‘Anun also affected over 40,000 residents of Sair and Ash-Shuyukh.

Israeli forces also raided the towns of Yatta, Beit Awwa, Deir Samet and Alkom in the Hebron district on April 18.

In downtown Hebron on April 18, Israeli soldiers invaded the home of Mohammedd Sadiq Iqnaibi. The soldiers arrested his two sons: 12 year old Anas and 13 year old Amer. Anas was released after three hours while Amer was transferred to the police station in the city. Iqnaibi said the family suffers constant harassment by Israeli soldiers and settlers because their home is close to the Abraham Avino settlement outpost.

The night of April 20, settlers from Kiryat Arba settlement, east of Hebron city, stoned a bus transporting Palestinian students. Settlers started throwing stones when the bus reached a main road east of the settlement. Ahmed Moahmamed Noaman, 13 years old, was wounded in the face and taken to the hospital in Hebron. The students attend Karmel School in Yatta and were on their way home from a school picnic.

The same group of settlers who recently occupied the Za’tari home in downtown Hebron attempted to displace the Kfeisheh and Jaber families from their nearby homes on April 21. The settlers told the Kfeisheh family to leave their house and tried to enter it. The same settlers told the Jaber family to leave their home before threatening to take it over. Both homes are located in the center of the Old City near the Ibrahimi Mosque. Both attacks happened in the sight of Israeli soldiers who did not stop them.

On April 22, Israeli forces arrested human rights defender Manal Jabari. Manal was documenting an incident near the Ibrahimi Mosque. She was taken to the police station in Kiryat Arba settlement.

On April 23, 2018 the Israeli army closed the main road into al-Diwwara village in the east of Hebron district with cement blocks, trapping 2,000 residents. The closure continued until April 29, 2018. The reason for the closure, locals report, is because the village is close to the east side of Road 60, which is used by Israeli settlers.

On April 24, Israeli forces confiscated the roof to a Palestinian home in Susiya village in the South Hebron Hills.

On April 30, the Israeli military installed and closed an iron gate at the entrance to Kharsa village that also serves many other villages in the Dura area. Mayor of Dura Ahmed Salhoub said the closure shows that Israeli forces are escalating attempts to besiege Palestinians and cut off villages from one another.