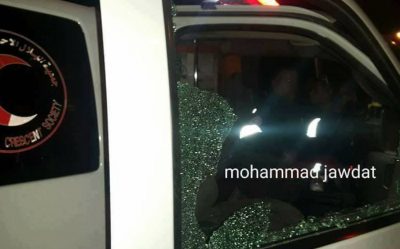 Dozens of Israeli colonists and soldiers invaded, on Thursday at night, the village of Qusra, south of the northern West Bank city of Nablus, before the army shot and seriously wounded one Palestinian, and injured many others, while the colonists smashed the front shield and one of the windows of a Palestinian ambulance, wounding the driver in his eye.

Media sources in Nablus said the colonists infiltrated into the eastern neighborhood of Qusra, and attacked many Palestinians, leading to clashes.

They added that dozens of soldiers also invaded the village, and fired live rounds, rubber-coated steel bullets and gas bombs, before evacuating the colonists from the area.

Ahmad Jibril, the spokesperson of the Red Crescent Society in Nablus, said the colonists smashed the front shield and one of the windows of one of its ambulances, wounding the driver in his eye. Jibril added that Red Crescent medics also moved one Palestinian, who was shot with a live round in his pelvis, to a hospital in Nablus, adding that the man is in a critical condition.

The soldiers also invaded ‘Aseera al-Qibliyya nearby town, and clashed with many Palestinians, before firing live rounds, gas bombs and rubber-coated steel bullets at them.

The Red Crescent identified the injuries among the Palestinians as:

The Israeli escalation started after illegal colonists shot and killed one Palestinian farmer, identified as Mahmoud Za’al Odeh, 46, from Qusra. The attack was carried out by approximately 20 settlers who came from the illegal “Yesh Kod” outpost, which was built on private Palestinian lands, and assaulted the Palestinian and his family, before one of them shot him in the chest.