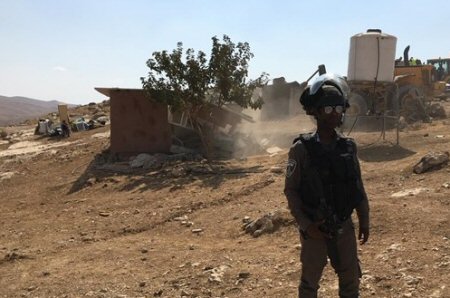 According to Ma’an, the demolition was carried out under the pretext that the structures were built without the nearly impossible-to-obtain Israeli building permit.

Forming a third of the occupied West Bank, with 88 percent of its land classified as Area C — under full Israeli military control — the Jordan Valley has long been a strategic area of land unlikely to return to Palestinians following Israel’s occupation in 1967.

Demolitions of Palestinian infrastructure and residences occur frequently in Area C, with Bedouin and herding communities being particularly vulnerable to such policies.

Israel almost never gives Palestinians permission to build in land classified as Area C — the more than 60 percent of the West Bank under full Israeli control — leaving residents no choice but to build their homes without permits who “live in constant fear of their homes and livelihoods being destroyed,” Israeli rights group B’Tselem has said.