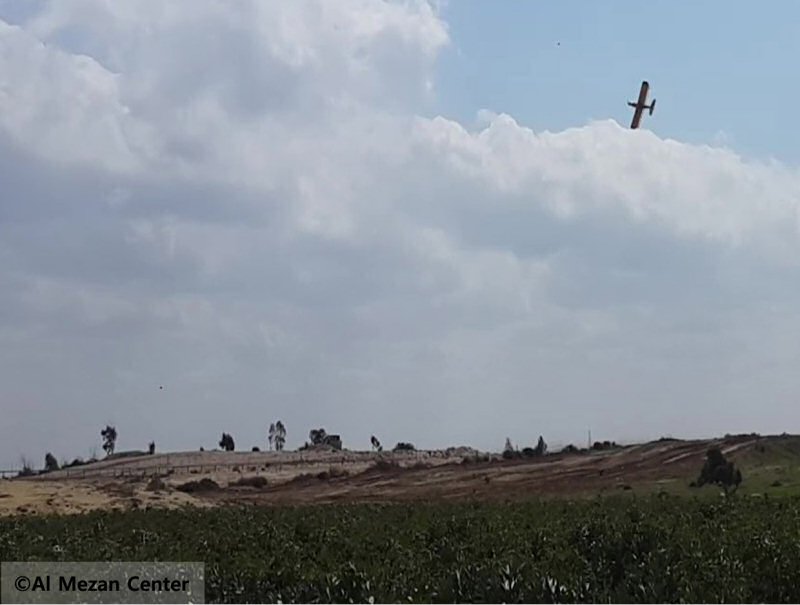 A number of human rights organizations have called on Israel to stop spraying dangerous herbicides over the Gaza Strip, as they endanger health and crops in the besieged coastal enclave, a press release by Adalah – The Legal Center for Arab Minority Rights in Israel said, on Wednesday.

Al Mezan Center for Human Rights in Gaza, Gisha – Legal Center for Freedom of Movement, and Adalah wrote to Israeli Prime Minister Benjamin Netanyahu in his role as Minister of Defense, Military Advocate General Sharon Afek, and Attorney General Avichai Mandelblit with an urgent demand to refrain from conducting further aerial spraying of herbicides inside and near the Gaza Strip, due to the severe damage to crops and the risk to the health of Gaza residents caused by the spraying.

According to media reports and accounts from Gaza residents, on December 4, the Israeli military sprayed herbicides, from the air, over areas inside the Gaza Strip and near the fence separating it from Israel. A variety of crops grown in fields near the fence inside the Strip were damaged, as a result.

WAFA further reports that, in December of 2015, the military confirmed that it uses planes to spray herbicides near the fence in order to clear terrain. Farmers and local organizations in the Strip report that spraying has occurred since 2014. In June 2016, Gisha, Adalah and Al Mezan submitted a complaint on behalf of eight farmers from Gaza whose crops had been damaged by spraying, calling on the Israeli authorities to refrain from the practice and compensate the farmers, to no avail.

In the letter submitted on Monday, the organizations emphasize that the spraying is a highly destructive measure, infringing on fundamental human rights and violating both Israeli and international law. Contrary to Israel’s official position, whereby the military only sprays herbicides over Israeli territory, farmers in Gaza report that the planes spray over the Strip’s aerial space.

The letter further notes that even if the spraying were to, in fact, take place only on the Israeli side, the chemical agents used are carried by wind over to the Gaza Strip, causing severe damage to crops and disproportionate financial losses to local farmers, meaning that there is no justification or legal basis for the continued use of this destructive practice.

A response submitted by the Ministry of Defense to a Freedom of Information petition, filed by Gisha in 2016, revealed that the chemical agents used in the spraying include glyphosate (“Roundup”), which had been declared a carcinogen by the World Health Organization and has been banned in many countries around the world. Multiple guidelines on the use of this agent entirely prohibit its use by aerial spraying, due to the high health risks associated with it.

The letter also cites a 2007 Israeli High Court decision against aerial spraying, in a case that challenged the Israel Land Administration’s directive to spray fields cultivated in unrecognized villages of the Naqab (Negev) desert, in the south of the country, on the alleged basis that the residents of the lands did not own them. The court ruled the spraying illegal, due to the risks it posed to the health of people, animals, and vegetation in the area.

The letter concludes with a demand to refrain from all spraying in the Gaza Strip area, and to use other, proportionate measures, within Israeli territory, that do not harm farmers in the Gaza Strip or put their crops or their health at risk.