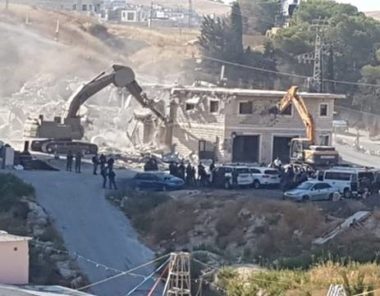 On Monday morning, 22 July 2019, Israeli military forces launched a large-scale destruction operation against civilian property in Wadi al-Humus neighborhood, in Sour Baher in the southern part of occupied East Jerusalem. Hundreds of Israeli soldiers and machinery carried out the destructions that resulted in hundreds of civilians losing their shelter.

The Palestinian Centre for Human Rights (PCHR) condemns this crime against civilians and considers it on par for ethnic cleansing, and holds the Israeli government accountable for escalating the situation in the occupied Palestinian territory (oPt).

PCHR calls upon the international community to hold its legal and moral responsibility and intervene effectively to stop Israeli crimes against Palestinian civilians and to provide necessary protection.

According to PCHR’s documentation, at approximately 2:00 on Monday, 22 July 2019, hundreds of Israeli soldiers moved into Sour Baher village with dozens of construction vehicles.

They stationed in Wadi al-Humus neighborhood, closed its entrances and cut all power supplies. Israeli soldiers then forcefully vacated buildings in the neighborhood, used physical violence against them and banned them from taking any of their belongings with them.

At approximately 06:00, destruction machinery took to work and preliminary numbers assert that at least 8 houses and buildings were destroyed, and explosives were planted in a 10-story building in order to destroy it. The destroyed houses include:

Wadi al-Humus neighborhood (area: 3,000 dunums; population: 6000) is located on the edge of Sour Baher, south of occupied East Jerusalem.  The neighbourhood is not within Jerusalem’s municipal boundaries and most of its lands are classified in Area A that is under full control of the Palestinian Authority according to the Oslo Accords; thus, the buildings’ owners obtained construction licenses from the Palestinian Ministry of Local Governance.  Following the construction of the annexation wall in 2003, the neighborhood was split as some houses ended up in the Israeli side but not under jurisdiction of the Israeli Municipality of Jerusalem.

First: the international community’s silence towards the Israeli violations, especially the destruction of an entire neighbourhood and displacement of its residents, reflects the inability of international bodies to protect international humanitarian law, as well as hundreds of United Nations resolutions issued over the past seven decades relevant to the Palestinian cause.

Second: PCHR reiterates that the Israeli judicial system, including the High Court, acts in support of the occupation and legitimizes its violations of IHL when the issues concern Palestinian victims.

Fourth: Article (49) of the 1949 Fourth Geneva Convention prohibited the Individual or mass forcible transfer or deportation of persons from their places of residence, unless it was for their own interest, such as protecting them from the dangers of armed conflicts.

Article 7.1.d of the Rome Statute of the International Criminal Court stipulates that Deportation or forcible transfer of population be considered a crime against humanity when committed as part of a widespread or systematic attack directed against any civilian population. This is also emphasized in articles 6, 7, and 8 of the Rome Statute.

PCHR calls upon the international community and UN bodies to intervene to stop Israel’s crimes and violations of Palestinian human rights, and to provide them with protection.