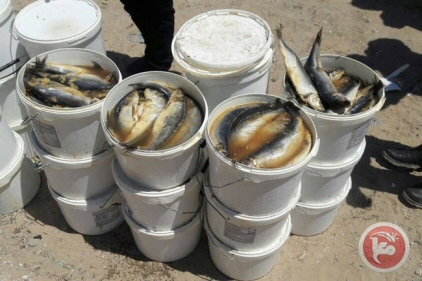 At least 1,000 Palestinians in the southern Gaza Strip suffered from food poisoning from eating salted herring on the first on Wednesday and Thursday — the second day of Muslim holiday Eid al-Fitr.

After hundreds of residents of Khan Younis and Rafah were hospitalized for food poisoning, Gaza’s Ministry of the National Economy dumped four tons of herring from markets in the two districts, the ministry’s Under Secretary Imad al-Baz told Ma’an News Agency.

He added that merchants who were caught selling spoiled herring would be arrested.Lab tests determined that the salted herring were inedible due to inadequate storage or problems during the salting process.

Herring, al-Baz said, need to be stored under 4 degrees Celsius. After the fasting throughout the holy month of Ramadan, herring is a popular Eid dish among Palestinians as they believe it helps avoid indigestion problems usually caused by eating a lot traditional Eid sweets and nuts while the stomach is still used to fasting. Al-Baz added that his ministry also found expired meat in some restaurants.

“Some restaurants have been selling stale shawarma which was leftover from a day before.” Legal procedures, he asserted, will be taken against the owners.Director General of Hospitals the Ministry of Health Abd al-Latif al-Hajj said that in Khan Younis, 420 people were treated at the European Hospital and 311 at Nasser Hospital, and 60 were treated at Abu Yousif al-Najjar Hospital in Rafah.

Some 250 were taken to al-Aqsa Martyrs Hospital in Deir al-Balah, central Gaza Strip.