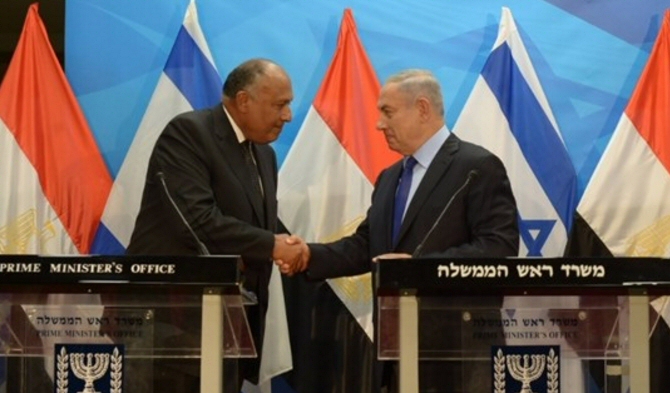 nsnbc : Egypt’s Foreign Minister Sameh Shoukry has flown to Israel, on Saturday, to discuss the resumption of the stalled peace talks between Israel and Palestine. Unofficially, Shoukry may also discuss Egypt’s concerns about the recent visit of Israeli PM Benjamin Netanyahu to African countries.

The Egyptian Foreign Ministry reports that Shoukry will meet Israeli officials including Israel’s Prime Minister Benjamin Netanyahu. The Ministry announced that Shoukry and his Israeli counterparts will be discussing “regional issues of mutual concern”.

Peace talks between Israel and Palestine were suspended after Palestinian Authority (PA) President Mahmoud Abbas announced the formation of a Palestinian Unity Government composed of Al-Fateh and Hamas in 2014.

In the light of a Palestinian government that includes Hamas, Israel rejected further talks and rejected to accept a Unity Government. Ironically, Israel has, at the very least in its beginning, financed Hamas in order to weaken secular PLO member parties. The unity government has since run into problems and the Hamas and Al-Fateh rivalry continues.

On May 17, Egypt’s President called for the resumption of the stalled peace talks. His calls were welcomed by the Palestinian Authority and came within the context of the preparations for the international conference on Palestine and Israel in Paris, France.