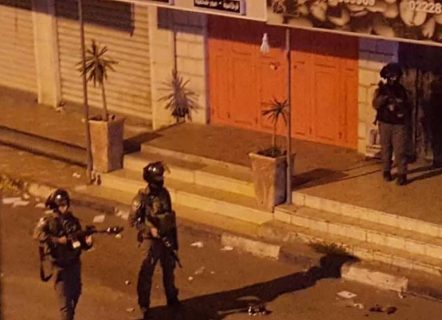 The strict Israeli siege and collective punishment imposed on Sa’ir and Bani Neim towns, in the southern West Bank district of Hebron, continued for the eleventh consecutive day, while the soldiers continued the invasion of homes, in various areas, and kidnapped six Palestinians, on Monday at dawn.

Dozens of soldiers invaded, during early dawn hours, Sa’ir town and the Shiokh village, before breaking into and ransacking dozens of homes, and kidnapped a young man, identified as Hamza Rajab Halayqa. The army also illegally confiscated a Palestinian car.

Media sources in Hebron said the invasions of homes are still ongoing, while the soldiers continued to interrogate dozens of Palestinians in their own properties.

The soldiers also invaded a home, belonging to resident Ismael Saber Shalalda, in Sa’ir town, ransacked the property, and turned it into a military post and a monitoring tower, in addition to installing military equipment in the property.

In Doura, dozens of soldiers invaded the center of the town, searched homes and kidnapped ‘Ayed Ahmad al-Faqeeh, along with his son, Akram, in addition to another Palestinian, identified as Khallaf Jabara Talahma, after violently searching their homes.

In addition, the soldiers invaded the al-Borj village, near Doura, and searched homes before summoning one resident for interrogation in Etzion military base.

In Hebron city, the soldiers kidnapped Malek Mohammad Elia Abu Aisha, 32, after they invaded his home in violently searched it.

Another Palestinian, a former political prisoner identified as Abdullah Othman ‘Obeido, was kidnapped from his home in Senger area, the Hebron city.