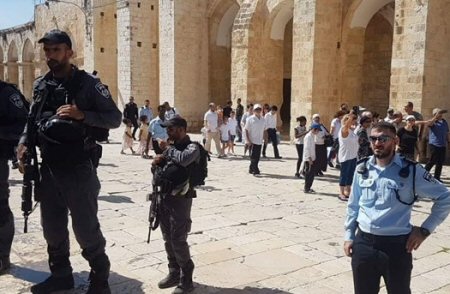 Heavily armed Israeli soldiers escorted hundreds of Israeli settlers into the Al-Aqsa Mosque compound, on Tuesday, to celebrate the Jewish  Sukkot holiday, while the Israeli authorities prevented restoration work from being completed in the compound.

Firas al-Dibs, head of the Public Relations and Media Department at the Islamic Endowment (Waqf), said that at least 420 Israeli settlers stormed the compound from 7:30 a.m. until 11:00 a.m.

Al-Dibs added, according to Ma’an, that Israeli settlers stormed the compound in large successive groups through the Moroccan Gate, one of the compound’s entrances under full Israeli control.

Al-Dibs mentioned that the Israeli settlers were chanting the Israeli national anthem “Hatikvah” as they provocatively toured the entire compound.

Director of the Al-Aqsa Mosque, Sheikh Omar al-Kiswani, said that Israeli forces took photographs of Muslim worshipers, as well as of the staff members of the Endowment department, as they were working on restoration projects in the compound.

Palestinians repeatedly accuse Israel of meddling in the internal affairs of the Muslim holy site with an intention to gain control over it and to turn it into a Jewish temple, due to the belief that it is the historical site of Jewish temples which were destroyed thousands of years ago.