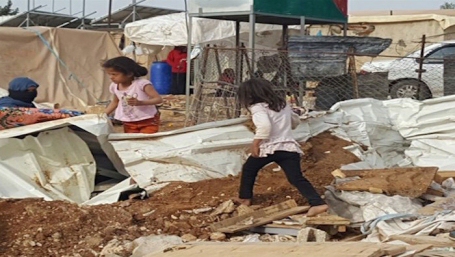 This morning, the Israeli army invaded Om Al Khair village in the South Hebron Hills, without prior warning, to demolish six families’ homes.

According to eyewitness Bilal Hadaleen, dozens of soldiers entered the village in the early morning and asked the families to leave their houses, upon which bulldozers proceeded to demolish the houses.

Local sources in Hebron said that this policy is reflects the occupation’s desire to deport more Palestinians from the South Hebron Hills for expanding Jewish settlement projects, there. On April 4, for example, the Israeli army demolished the home of Azzam Mahmoud Ghnaimat in Soureef, where he lived with his 6 family members. Also on on April 4, Israel demolished the homes of Ahmad Nassar, Muhammad Kmeil and Ahmad Abu a-Rob, in a punitive measure for a gun attack the three carried out on February 3, 2016, at Damascus Gate.

Last week two houses and dozens of stone walls were demolished in Al-Marjem village, in the northern West Bank. When the army invaded Al-Marjem, to demolish Jamal At-Taweel and Hisham Al-Jabrawi’s homes, the army closed the village and prevented the media from entering the village during the demolition.