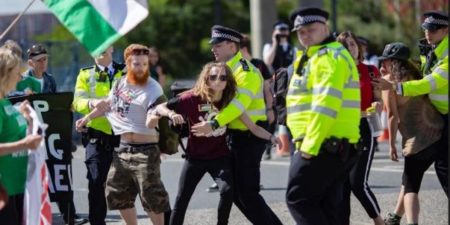 The UK Department for International Trade has officially invited the government of Israel to DSEI, despite a UN report earlier in the year stating that Israel’s repression of unarmed Palestinian protestors may have constituted “war crimes or crimes against humanity”.

Organizers Palestine Solidarity Campaign and War On Want are seeking to highlight Israel’s systematic violations of human rights and international law and call on the UK Government to implement a 2-way arms embargo with Israel.

Under the banner “Stop Arming Israel”, a day of creative action and protest organised by campaigning groups Palestine Solidarity Campaign and War on Want is taking place outside the fair throughout Monday 2nd September. Protesters have blocked roads in order to stop trucks carrying weapons from getting inside the fair.

Organisers of the event claim that DSEI is a site where violations of international law and human rights are flaunted by companies, including Israel’s Elbit Systems, who market their weapons as ‘battle-tested’, meaning that they have been tried and tested in attacks on Palestinian civilians.

They are also voicing opposition to the UK Government’s role in co-hosting the event. Israel has appeared for the first time on the Department of International Trade’s list of official invitees for DSEI, only months after the United Nations Commission of Inquiry on Gaza protests found evidence indicating that Israeli forces fired on unarmed Palestinian protestors unlawfully, using force that may have constituted war crimes or crimes against humanity.

Ryvka Barnard, Senior Campaigns Officer (Militarism and Security) at War on Want, said: “The DSEI arms fair brings together the most destructive elements of the global arms trade, responsible for countless deaths and immeasurable destruction around the world.

Companies displaying their wares include the likes of Israel’s Elbit Systems, which has produced internationally banned weapons such as white phosphorous and artillery systems that can be used for cluster munitions. Elbit and other countries boast that their weapons are battle-tested, meaning that they fine-tune their products by testing in live combat situations. The people of London don’t want our city to be used as a marketplace for companies turning crimes against humanity into profit.”

Huda Ammori, Campaigns Officer at Palestine Solidarity Campaign, said: “The UK Government can talk all it wants about respecting human rights, but its deadly arms trade with Israel reveals the truth. The UK Government is showing a total disregard for Palestinian lives, and is fully complicit in the atrocities committed against them by the Israeli state. We need a 2-way arms embargo now, and we need all other complicit companies and institutions – from HSBC to UK universities – to cut ties with the Israeli arms trade too and to stand on the side of human rights. That’s why we’re taking action at the DSEI arms fair.”

Activities throughout the day include street theatre, political discussions, banner-making and dabke dancing (Arab folkloric dance). The day’s events will lead into a street party this evening featuring a performance by award-winning poet Sabrina Mahfouz and a DJ set from Ben Smoke.

The ‘Stop Arming Israel’ protests begin a week-long set of protests against the DSEI arms fair, with a different theme each day, highlighting the diverse communities opposing the hosting of DSEI in London, PNN reports.