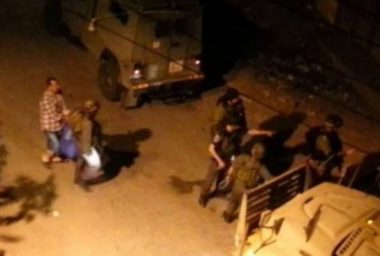 The Palestinian Prisoners Society (PPS) has reported that Israeli soldiers abducted, on Tuesday at dawn, at least twenty-four Palestinians, including children and political prisoners, from their homes, in several parts of the occupied West Bank.

The soldiers conducted extensive invasions and violent searches of homes across the occupied West Bank, and interrogated many Palestinians while inspecting their ID cards.

Furthermore, the soldiers installed many roadblocks across the West Bank, before stopping and searching cars, and interrogated dozens of Palestinians while inspecting their ID cards.

Among the invaded homes are the property of a political prisoner, identified as Karmel Barghouthi, from Kobar village, north of Ramallah, and the homes of two former political prisoners, Nafeth Shawamra and Mohammad Abu Arqoub, from Doura town, south of Hebron.

The soldiers also caused excessive damage to many invaded homes, especially in Hebron city, in southern West Bank, and Beit Ummar town, north of Hebron, where the soldiers smashed doors and furniture during the violent searches.