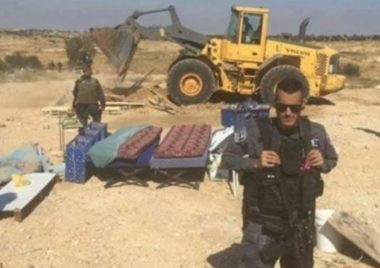 Israeli soldiers and police officers, accompanied by members of the so-called “Negev Development Authority,” invaded the Bedouin village of al-Araqib, in the Negev Desert, and demolished it for the 157th time.

The soldiers and officers confiscated the tents, and destroyed all structures installed by the villagers, displacing them for the 157th consecutive time.

The village of al-Arakib witnesses constant invasions and demolitions, and just a few days ago, it was attacked and destroyed, and the soldiers abducted and an elderly woman, in addition to an elderly man and his son.

Several days ago, the Israeli Central Court in Be’er as-Sabe’ (Beersheba), in the Negev Desert, imposed a fine of 1.600.000 Shekels fine on the villagers of al-Arakib, to pay for the costs of the ongoing demolitions of their village, the evictions and for “invading lands owned by the state.”

Al-Arakib is one of the dozens of Palestinian villages in the Negev that predate the state of Israel, but remain unrecognized and subject to constant invasions, demolitions and violations.

The village, with about 220 residents, was demolished for the first time on July 27, 2010, but the village has since been rebuilt dozens of times by its residents and activists.