Hundreds to Cycle Through London and Manchester In Support of Palestine 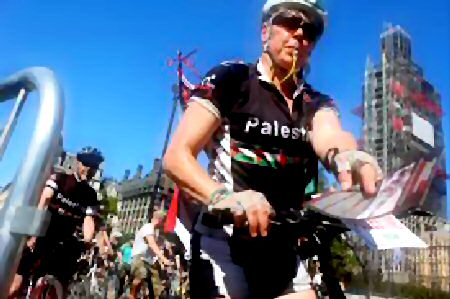 Hundreds of human rights campaigners from across the UK are set to take part in The Big Ride for Palestine 2019, an annual event which combines a love of cycling and solidarity with the Palestinian people.

The event is supported by a number of campaigning organisations including Palestine Solidarity Campaign, War on Want, Jews for Justice for Palestinians and Campaign Against Arms Trade.

The event aims to raise awareness of the human rights abuses suffered by the Palestinian people, with a particular focus on the plight of children living in Gaza – a besieged 139 square mile area of land within which almost 2 million Palestinians live. More than 40% of these people are under 15 years old.

The event is also raising money for the Middle East Children’s Alliance (MECA); a charity that specialises in working with children who have been traumatised by living under a military occupation. Since 2015, The Big Ride has raised nearly £150,000 for sports equipment used in the healing and rehabilitation of children, a project run in partnership with MECA.

This year’s ride also marks the fifth anniversary of Israel’s bombardment of Gaza which took place in July and August 2014. This assault killed over 2,200 Palestinians, of whom 551 were children.

Dr Mona El Farra, Gaza Director of MECA, said: “With every mile they cycle, those participating in The Big Ride are protesting against 72 years of Israeli ethnic cleansing of Palestinians. They are sending a message to the Palestinian people, and to the people of Gaza in particular, that they are not abandoned. They are bringing hope to millions of Palestinian children for whom life has been scarred by trauma and fear – we greatly appreciate and salute this act of solidarity.”

Ellen Logan, an organiser of The Big Ride, said: “I’ve witnessed the daily oppression of the Palestinian people; the discrimination, the violence, the inhumanity of the situation. I returned wanting to get involved in something that highlighted the appalling apartheid practices I saw, and that’s why I’m part of The Big Ride. We are reaching a lot of people and raising crucial awareness of the injustices that Palestinians face on a daily basis”.