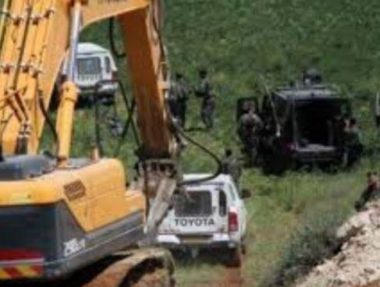 Israeli forces, on Tuesday, demolished a pool used for irrigation in Wad al-Ghroos, an area close to the illegal Israeli settlement of Kiryat Arba, to the east of the occupied southern West Bank city of Hebron, reported WAFA correspondence.

A large unit of Israeli forces, accompanied by bulldozers and other heavy machinery, raided the area and demolished a 4,500 cubic meter pool owned by local resident Ziad Jaabari, and used for the irrigation of fields and crops in the area, under the pretext that it was built in Area C of the occupied West Bank, which is under full Israeli military rule.

He added that Israeli forces verbally insulted and physically attacked residents, journalists and activists while they were at the scene.

Jaabari said the pool was used to collect rain water in order to use it during the summer season, to irrigate their farms, expressing fear that without the pool and the water, many crops, particularly, tomatoes and cucumber, may be ruined.

Several houses in the same area have been given notices of demolition by Israeli soldiers, and for the same reason, which is construction without a the impossible-to-get permit in Area C.