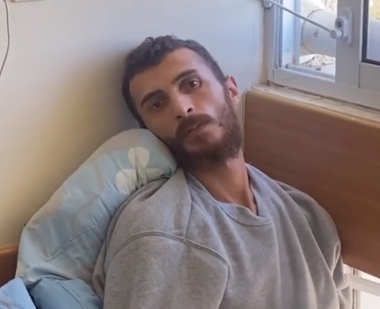 The Palestinian Detainees’ Committee has reported, Saturday, that a hunger-striking detainee in Israeli prisons suffered a serious health setback and entered a coma for the second time.

The Committee stated that the detainee, Ghadanfar Abu Atwan, started the open-ended hunger strike 53 days ago, protesting being held under the arbitrary Administrative Detention orders, without charges or trial.

It added that the detainee entered a coma for the second time since he was transferred to Kaplan Israeli medical center and stated that his condition continues to deteriorate.

His family said al-Ghadanfar became unable to speak, and that his health continues to deteriorate.

They called for his immediate release especially since he is being held without charges or trial and held Israel responsible for his life.

It is worth mentioning that, two days ago, the Israeli Supreme Court ordered suspending the Administrative Detention orders against the detainee after his lawyer filed an appeal that included medical reports stating the serious dangers to his life.

Suspending the orders does not mean the detainee will be released, especially since the Administrative Detention orders are still valid and could be reinstated once he ends his strike without achieving his legitimate demands.

The detainee is also a former political prisoner who was abducted several times in the year 2013 and held a hunger strike in the year 2019 protesting being held under the Administrative Detention orders.

His family called on various legal and human rights groups to intervene and to ensure Israel allows his lawyer and independent medical professionals to visit with him and ensure that he receives the specialized medical attention he urgently needs.

Abu Atwan, from Doura town, south of the southern West Bank city of Hebron, was abducted in October of 2020 and was slapped with several arbitrary Administrative Detention orders, holding him captive without charges or trial.