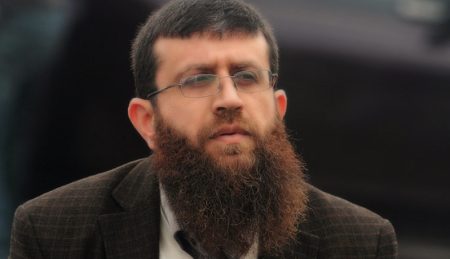 Palestinian detainee Khader Adnan, who has been on an open-ended hunger strike for 57 days, in protest of being detained without charge or trial, has also stopped drinking water, the Detainees and Ex-Detainees Affairs Commission said on Sunday, according to WAFA correspondence.

“Prisoner Khader Adnan has decided to step up his hunger strike in Israeli jails by abstaining from drinking water from Sunday until his release,” the commission said in a statement.

Adnan’s health has seriously deteriorated after he stopped taking supplements that help him survive the long fast. He has begun to show serious symptoms such as vomiting blood.

Adnan, aged 40, from Arrabeh village in the West Bank, has told his lawyers and visitors that he went on hunger strike to obtain his freedom.

Since the beginning of his the strike, Adnan has been subjected to abusive measures. He has been isolated, moved from one detention center to another, deprived of visitation and held in harsh prison conditions.

Adnan’s first hunger strike against his detention was in 2012 when his strike lasted for 66 days to protest his administrative detention without charge or trial, as well as in 2015, which lasted for 54 days. In both strikes he was able to shorten his detention and regain his freedom.

He is married and is a father of seven children, the oldest of whom is 10 years old and the youngest, Maryam, is 18 months.