Hamas Condemns Attack on US Synagogue 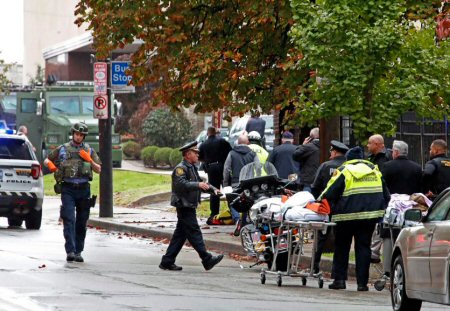 “The Islamic Palestinian Resistance Movement condemns the killing of any human, whether he is a Muslim, Christian, Jew or a follower of any religion,” quoted the official.

“It is with deep regret and profound sadness that we received the news about the terrorist attack on a Jewish synagogue in Pittsburgh, which resulted in the killing of 11 Jews and injuring six others,” a senior Hamas leader said.

In a statement, Member of Hamas International Relations Bureau Basim Naim said: “As Palestinians who have been enduring the terrorism of the Israeli occupation, we are the most to realize what terrorism means and what are its destructive consequences.”

He added. according to Days of Palestine: “On this sorrowful occasion, Hamas would like to extend its sincerest condolences to the families of the victims, wishing the injured a speedy recovery.”

Naim concluded his statement, saying: “This aggressive act against ‘worship places’, which is highly condemned, highlights that terrorism has no religion nor ideology.”

Following to the statement, Hamas quoted its founder and late leader Sheikh Ahmad Yassin as saying: “The Islamic Palestinian Resistance Movement condemns the killing of any human, whether he is a Muslim, Christian, Jew or a follower of any religion.”

American media reported, on Saturday, that a gunman opened fire inside the Tree of Life Congregation Synagogue in Pittsburgh, Pennsylvania, during a service, killing 11 Jewish worshipers and injuring six others.

The suspected gunman, who identified as 46-year-old Robert Bowers, surrendered and was taken into custody.