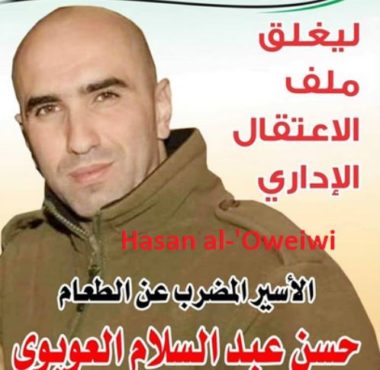 The Palestinian Prisoners’ Society (PPS) has reported that a Palestinian detainee, who started a hunger strike 66 days ago, was moved to a hospital after a sharp deterioration in his health condition.

The PPS said the detainee, Hasan Abdul-Salam al-‘Oweiwi, 35, from Hebron in southern West Bank, was rushed from Nitzan al-Ramla prison to Barzilai Medical Center, Thursday, after a serious health deterioration.

It added that the detainee started his strike on April 2nd, 2019, protesting his continued arbitrary Administrative Detention, without charges or trial.

It is worth mentioning that al-‘Oweiwi, a father of three children, was abducted on January 15, 2019, and is a former political prisoner who spent years in Israeli prisons.