I Am A Warrior Prisoner 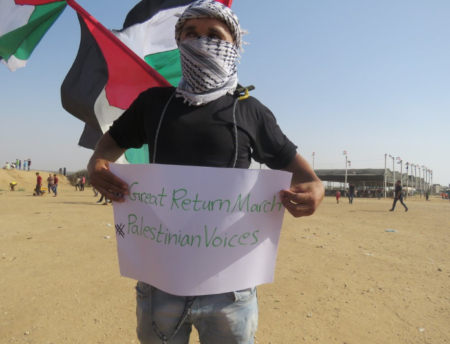 I live in a very small territory of 365 square kilometers, also known as the largest open-air prison in the world, located in colonized Palestine. The prison guards are powerful oppressors, the enforcers of “apartheid,” also known as Zionists.

These jailers keep us locked, except for the few times when they open the door a crack and allow one of us to squeeze through. For more than 12 years, they have deprived us of reliable electricity, clean drinking water and—the worst of all—hope.

Increasingly, we prisoners feel as if we are buried alive in a cemetery for the living dead. We have two choices: stay put and die a slow death from disease, war or desperation, or risk everything in a prison break. Some prisoners, like my friend Mohammed Abu Shammala, actually succeed in escaping to freedom. But the jailers have powerful allies spread around the world, intent on making life hard for those on the run. They caught up with Mohammed in Turkey, sheltering in the building in which he tried to make a new home along with other Syrian and Palestinian refugees. The jailers’ henchmen hurled canisters of gas into his room, forcing him to flee to safer space via the balcony—where he slipped and fell from the fourth floor. He never emerged from his coma, dying a week later. His family, still in the cemetery/prison, wanted to bring his body home, but we all believe he is in a better place. His tragedy has gone largely unnoticed. Prisoners’ deaths barely register on the world stage.

It all began in 1948, when a people who once were inmates themselves staged a massive prison break of their own. Free at last, they traveled to a new land and built a prison of their own design. They got their revenge by doing unto others what had been done to them. The original residents of the “new” land were either murdered in their tracks or chased into the newly designated prison, with the jailers slamming the door shut with a satisfying clang. Today, 66 percent of the people crammed inside were chased there from ancestral homes.

With stories of their own imprisonment passed from generation to generation to keep the embers of anger and hatred alive, the jailers frequently lash out with a mighty roar, fielding their lethal weapons to kill prisoner leaders as well as random others who merely get in the way by continuing to live.

Recently, those inmates who had the audacity to refuse to die decided to no longer cooperate with their jailers in the hopes of mercy. They gathered at the gates every Friday, shouting that it was time to return to their homeland and struggling to break through the prison walls. The jailers, not used to such insubordination from the masses, ordered several of their number to shoot randomly, making it clear a massive break would not be tolerated. Now that they had tasted freedom, the jailers wanted it all for themselves.

Still, the prisoners keep at it, amassing every week at the walls that contain them, raising their voices and risking their bodies in the hope of being heard by those on the outside who still had hearts and morals.

Week after week, the prisoners came and shouted, then went back to their graves only to escape again. It has been over a year since the challenges began. Hundreds of the prisoners have been sent to early deaths or maimed to the point they can no longer protest. But others take their place, knowing they will die in the prison-cemetery if they do nothing. Is there really any difference?

The prisoners know that others have fought the same battle and lost. But many others have won. They have chosen to stand and fight. And now, some of these warrior prisoners refuse the tantalizing mirage of a permanent escape. They know the cemetery-prison could be a paradise on earth if its walls were torn down. The land is their home, history, identity and life.

I am one of those warrior prisoners. I will never leave my cemetery-prison until it is once again a paradise.

~We Are Not Numbers/Days of Palestine