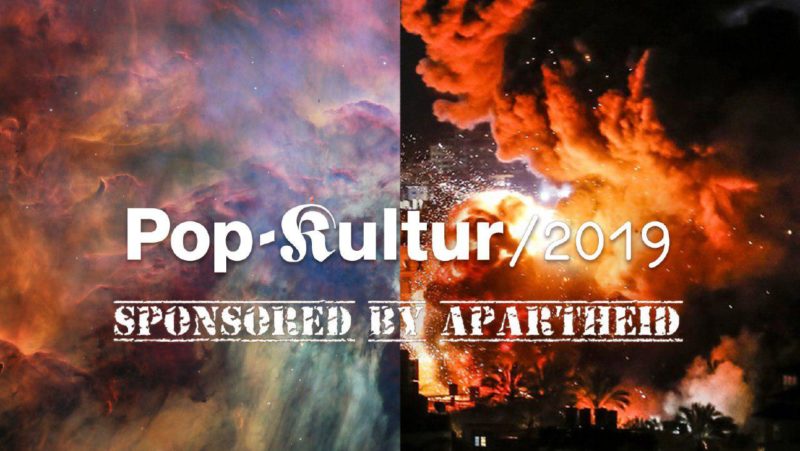 July 30, 2019 / Palestinian Campaign for the Academic and Cultural Boycott of Israel (PACBI) / Germany

The Palestinian Campaign for the Academic and Cultural Boycott of Israel (PACBI) calls on all participating artists in Pop-Kultur Berlin festival to withdraw, due to its ongoing partnership with the Israeli embassy. Fourteen artists from six different countries withdrew from the last two editions of the festival for this reason, just as they would have withdrawn from an event in Germany partnered with the South African regime during the height of apartheid there.

Indeed, Israel gave constitutional status to its long-established apartheid regime against Palestinians with last year’s “Jewish Nation-State” law. Emboldened by unprecedented levels of support from the Trump administration, Netanyahu recently declared that “Israel is not a state of all its citizens” and promised to annex the occupied Palestinian West Bank.

UN investigators have said that Israeli snipers’ intentional targeting of unarmed Palestinian protesters in the besieged Gaza Strip, including medics, journalists, children, and those with disabilities, “may constitute war crimes or crimes against humanity”. Yet Israel has not been held to account. Its brutal siege of two million Palestinians in Gaza continues, and its impunity on the world stage remains intact.

This impunity is why thousands of artists now support the cultural boycott of Israel’s regime and complicit institutions, with Israel lobby groups privately acknowledging its impact and growth. But regardless of whether or not a particular artist supports or endorses the Boycott, Divestment and Sanctions (BDS) movement for Palestinian rights, everyone has an ethical obligation to do no harm to nonviolent struggles for human rights by not undermining them and to defend freedom of expression.

Israel’s far-right regime of apartheid, occupation and settler-colonialism explicitly whitewashes its oppression against Palestinians through culture, including by partnering with supposedly progressive festivals. Yet Pop-Kultur organisers have repeatedly made clear, in stark, vulgar and anti-Palestinian terms, that partnering with Israel is more important than maintaining its own artistic programme.

Indeed, the festival can no longer attract the diverse range of progressive artists that it could just a few years ago. Its organisers are screening all potential artists, excluding all those who might take issue with the festival’s collaboration with Israel’s regime of oppression. For this reason, we anticipate fewer cancellations this year. But we and our partners in Germany and around the world, including progressive Jewish and Israeli groups and figures, will continue the campaign to boycott Pop-Kultur festival until it ends the partnership.

As the far-right continues to rise across the world, anti-racist movements like BDS are under increasing anti-democratic attack, including in Germany. We agree with Martin Luther King Jr., that “injustice anywhere is a threat to justice everywhere”. We urge all participating artists to consider the ‘indivisibility of justice’ and to refuse to undermine the peaceful struggle for Palestinian human rights.

Human Interest 07/26/19 BTS Testimonial: “Around every such settlement there’s a circle, a radius of one kilometer.”