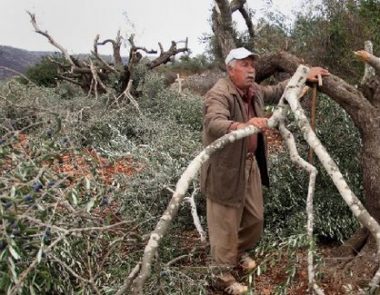 A group of illegal Israeli colonialist settlers uprooted, Tuesday, many olive saplings in the al-Hamra area, east of Yatta town, south of Hebron, in the southern part of the occupied West Bank.

Rateb Jabour, the coordinator of the Popular and National Committees in southern Hebron, said the assailants came from Ma’on illegal colony, which was built on Palestinian lands east of Yatta.

He added that the Israeli assailants uprooted 23 olive saplings in the al-Hamra area, east of the Tiwana village, and that the orchard is owned by Jom’a Mousa Rib’ey.

Jabour also stated that such attacks have witnessed a serious escalation in recent years, and aim at forcing the indigenous Palestinians out of their lands, in order to build and expand the illegal colonies, in direct violation of International Law and the Fourth Geneva Convention.

He called on various local and international human rights groups to intervene and end the escalating Israeli violations, especially since the illegal colonists are encouraged by the extremist government of Benjamin Netanyahu.