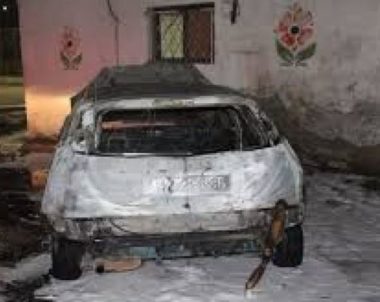 A group of fanatic illegal Israeli paramilitary settlers infiltrated, on Wednesday at dawn, into Orif village, south of the northern West Bank city of Nablus, burnt a Palestinian car, and wrote racist graffiti.

Media sources in Nablus said the assailants burnt a car, owned by Mahmoud Mahfouth Shehada, after causing damage to it.

They added that the colonists also wrote racist anti-Palestinian and anti-Arab graffiti, before fleeing the area.

The attack is part of ongoing violation against the Palestinians, their homes, lands and property in several parts of the West Bank.

On October 12th, a Palestinian woman, identified as Aisha Mohammed Talal al-Rabi, 47, was killed by a group of Israeli paramilitary settlers, who used large rocks to attack the car she was riding in with her husband.

Aisha was killed, and her husband injured in the attack, which took place south of Nablus, in the northern part of the West Bank.