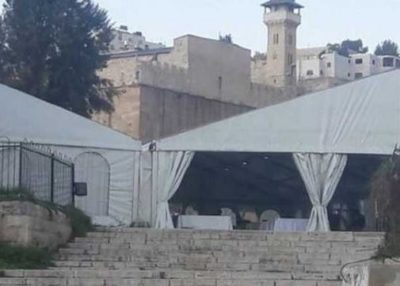 A group of fanatic illegal Israeli colonialist settlers installed, Tuesday, a large tent in Tal Romeida Palestinian neighborhood in Hebron city, in the southern part of the occupied West Bank, to welcome Israeli Prime Minister Benjamin Netanyahu, who intends to conduct a provocative visit to the city, Wednesday.

The colonists installed the tent in the Palestinian neighborhood, which falls under full Israeli military control, to receive Netanyahu, who will be touring in the occupied city as part of his reelection campaign ahead of the Knesset elections on the 17th of this month.

Tal Romeida is a historic and archeological area, located northwest of the Ibrahimi Mosque, where Israel also built the illegal Ramat Yishai colony on Palestinian land in the Old City.

Ramat Yishai is one of four outposts in the Old City of Hebron; Beit Hadassah in the barricaded Shuhada Street, Beit Romano which was installed in Osama Bin al-Monqith School for Boys, located at the entrances of the Old City and the Shuhada Street, and Avraham Avino, which was installed in the closed Fruits and Vegetables Market in the Sahla Street.

In related news, an armed Israeli colonist fired many live rounds at Palestinians selling fruits and vegetables at a junction between Burqa and Bazaria towns, north of Nablus, in the northern part of the occupied West Bank.

The attack did not lead to casualties but forced the Palestinians to leave in fear of further assaults and violations.