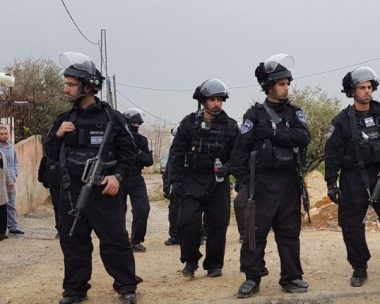 Israeli soldiers abducted, on Tuesday evening, two Palestinians in the towns of al-‘Isawiya and Silwan, in occupied East Jerusalem.

The Wadi Hilweh Information Center in Silwan (Silwanic) has reported that the soldiers abducted a man, identified as Mohammad Mousa Mheisin, in his fifties, while standing in front of a shop in al-‘Isawiya.

Silwanic added that the soldiers also abducted a young man, identified as Yazan Siyam, after invading his home in Wadi Hilweh neighborhood in Silwan.

In related news, dozens of soldiers invaded al-‘Isawiya after an Israeli bus driver accidentally drove into the town while heading to an illegal Israeli colony, and accompanied the bus out of the town.

The army also stopped many young men in the town, and harassed them while investigating their ID cards.