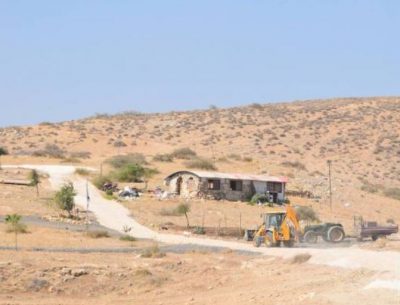 On Thursday, a group of Israeli colonists, illegally living on Palestinian lands in the West Bank’s Plains, started the preparation work for paving a road leading to their illegal colony.

Palestinian human rights activist ‘Aref Daraghma, said the colonists started laying down the foundation of a new road which they intend to pave, in order to provide easy access to the illegal colony, in Khallet Hamad community, of the northern Jordan Valley of the occupied West Bank.

He added that, in 2016, the colonists illegally occupied Palestinian lands in Khallet Hamad, and installed barns and mobile homes, before settling there.

Daraghma stated that the outpost started the horizontal expansion into more Palestinian lands in the area.

Besides the illegal annexation and isolation of Palestinian lands, including fertile agricultural areas owned by the Palestinians, Israel’s colonies in the West Bank, including in and around occupied East Jerusalem, violate International Law, and the Fourth Geneva Convention to which Israel is a signatory and a constant violator.