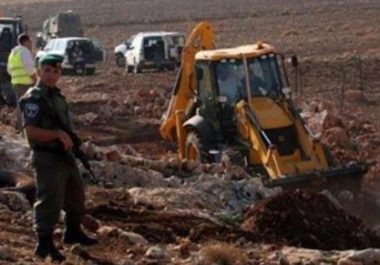 A group of illegal Israeli colonists and soldiers bulldozed and uprooted, Tuesday, Palestinian lands in Kisan village, east of Bethlehem in the occupied West Bank.

Hasan Berjaya, the head of the Colonization and Wall Resistance Commission, stated that the colonists, accompanied by personnel of the “Civil Administration Office, and soldiers” invaded the lands and started bulldozing them.

The Civil Administration office, the administrative branch of Israel’s illegal occupation, is claiming that it is bulldozing the private Palestinian lands to install solar panels for the surrounding colonies.

Berjaya said that the lands, 660 Dunams (163.09 Acres), were illegally annexed by Israel under the pretext of being “state lands,” an issue which would lead to further confiscation of Palestinian lands for Israel’s colonialist activities, and would surround the village.