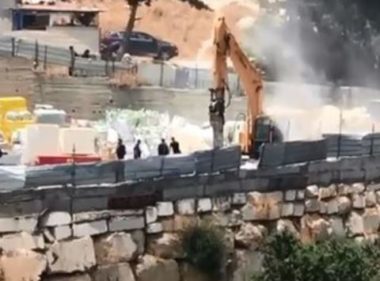 Israeli soldiers invaded, Tuesday, Jabal al-Mokabber neighborhood, southeast of occupied East Jerusalem, and demolished a hardware store, under the pretext of being unlicensed.

The soldiers surrounded the entire neighborhood before invading it, and prevented the Palestinians from entering or leaving it.

Local sources said dozens of soldiers surrounded and isolated the area before invading it, accompanied by bulldozers, and demolished the property.

On Tuesday morning, the army demolished a two-story residential building of four units, in Shu’fat refugee camp, in the center of Jerusalem.

On Monday at night, the soldiers demolished a two-story residential building in Silwan town, south of the Al-Aqsa Mosque, in Jerusalem.