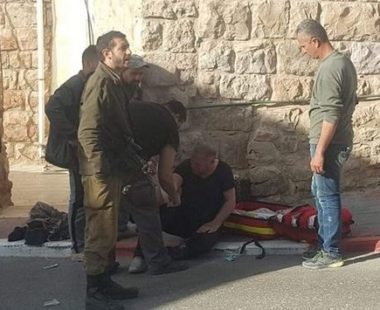 An illegal Israeli colonialist settler rammed, Thursday, a Palestinian man with his car, and fled the scene, before Palestinian medics rushed the wounded man to a hospital, in Hebron city, in the southern part of the occupied West Bank.

Aref Jaber, a nonviolent activist with the Human Rights Coalition in Hebron, said the colonist rammed a Palestinian, identified as Jom’a Qfeisha, before fleeing the scene.

Jaber added that the wounded man works for the Hebron Reconstruction Committee, and suffered a fracture in his arm, in addition to various cuts and bruises.

Medical sources said  Qfeisha was rushed by local medics to a hospital in Hebron city, and described his wounded as moderate.

Israeli soldiers, who are constantly deployed in Hebron, examined the man, but did not call for an ambulance, before the Palestinian medics managed to reach him.