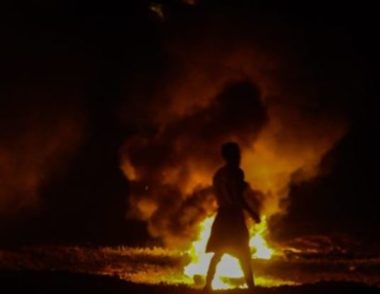 An Israeli military drone fired, on Wednesday at night, a missile at young Palestinian protesters in the Central District of the Gaza Strip.

Eyewitnesses said the drone fire a missile at the young men, east of the al-Boreij refugee camp, and added that the missile detonated close to the protesters but did not lead to casualties.

On its part, the Israeli army claimed its missile targeted Palestinians “flying flammable balloons” into nearby Israeli areas.

It is worth mentioning that dozens of Palestinian youngsters held the protest at night, along the perimeter area across the eastern part of the Gaza Strip.

On Wednesday evening, the soldiers executed a young man, who stepped out of his car and tried to provide aid to a Palestinian, who was shot and seriously injured by the soldiers in his car, while his wife and children were also in the vehicle.

The slain young man, identified as Ahmad Jamal Mahmoud Manasra, 26, was driving behind another Palestinian car, when the soldiers shot and seriously injured the driver, who was with his wife and children.

On Tuesday at night, the soldiers killed a young Palestinian man, identified as Omar Abu Laila, 19, who is suspected of killing two Israelis, last Sunday; the Palestinian was killed after the soldiers surrounded a home, and exchanged fire with him in Abwein village, near the central West Bank city of Ramallah.