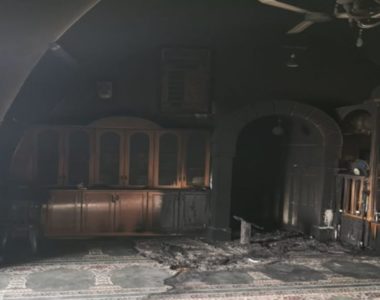 Illegal Israeli colonists, squatting on stolen Palestinian lands, burnt sections of a mosque in Sharafat Palestinian village, southwest of occupied East Jerusalem, after infiltrating into the village at dawn.

An eyewitness told the Palestinian Maan News Agency that, as he and around forty other Palestinians, headed to the mosque for dawn prayers, they were surprised to find many Israeli police officers around the mosque.

He added that the colonists burnt the inside of the mosque, such as its walls and carpets, before the locals rushed to it and managed to extinguish the fire, and the police were called to the scene.

The Israeli assailants also wrote racist graffiti on the walls of the defaced mosque.

Israeli police officers surrounded the mosque after closing it, and informed the villagers that the holy site is now closed as an investigation is underway.

It is worth mentioning that, several years ago, the colonists attacked the same mosque, and attempted to burn it. The Israeli police were then called to the scene and allegedly investigated the fire, but without any results.

The Palestinian Ministry of Waqf and Religious Affairs strongly denounced the attack, and said it comes as a natural outcome of ongoing Israeli incitement against the Palestinians and their holy sites.

There have been dozens of incidents in which Israeli colonists burnt mosques and churches, in addition to causing damage in cemeteries across occupied Palestine.