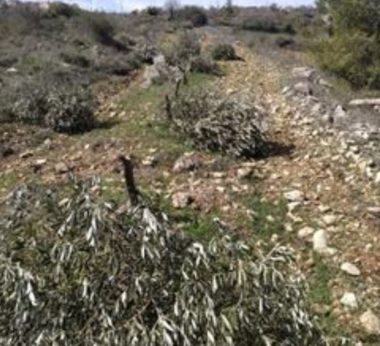 Israeli colonialist settlers, illegally squatting on Palestinian lands, chopped Saturday 200 grapevines in Faghour area, in the al-Khader town, south of the West Bank city of Bethlehem, bringing the number of uprooted grapevines and olive trees in the West Bank to 780 in three days.

He added that the attack took place in an area that is subject to frequent similar violations, and only comes a day after the colonists uprooted 300 grapevines, owned by Nasser Isamel Marzouq, near the illegal colonies of Daniel and Eliezer.

On Thursday, the colonists chopped 200 olive trees and 80 grapevines in lands, owned by Marwan Abdul-Salama Salah and Anas Fathi Salam, near Eliezer colony.

It is worth mentioning that the colonists conduct hundreds of similar violations each year, targeting olive orchards, farmlands, and grapevines across the occupied West Bank, in addition to flooding lands with wastewater.

The Israeli assailants also frequently try to fence the Palestinian lands and squat on them in order to annex them to build new colonialist outposts or to expand existing ones.

All of Israel’s colonies in the occupied West Bank, including in and around occupied East Jerusalem, whether they have been authorized by various Israeli governments or not, are illegal under International Law, the Fourth Geneva Convention, in addition to numerous international resolutions and treaties.