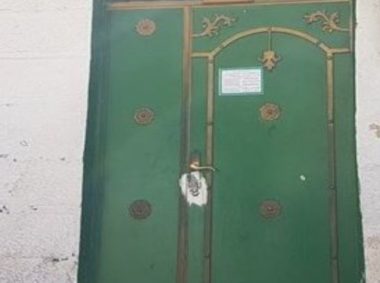 The colonists broke the lock, and sabotaged its gate, for the third time in just a few months, the Palestinian Waqf and Islamic Endowment Ministry has reported,

The mosque is on the same road extending from the Sahera Gate towards the Al-Aqsa Mosque, and is located on the opposite direction of the local al-Qadisiyah School.

Husam Abu ar-Rob, the administrator of the Waqf and Islamic Endowment Ministry, denounced the attack, and said that it is part of ongoing Israeli violations targeting the Al-Aqsa Mosque and holy sites in occupied Jerusalem.

He added that Israel is ongoing with its excavations under al-Aqsa, along with several parts of Jerusalem, causing serious damage to homes and buildings.

Abu ar-Rob called for countering the escalating violations, and Israel’s ongoing attempts to alter the demography and geography of the occupied city.