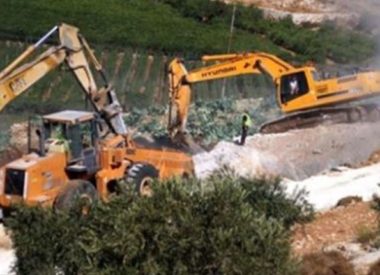 Many illegal Israeli colonists invaded, on Tuesday at dawn, Palestinian agricultural lands in Khirbat Lafjan area, east of Aqraba village, south of Nablus in the northern part of the occupied West Bank, and uprooted dozens of trees.

He added that the colonists bulldozed and uprooted more than 200 Dunams, owned by members of Sbeih and al-At’out families.

Daghlas also stated that Israeli soldiers were present near the area, but did not attempt to stop the attacks.

It is worth mentioning that the army has recently informed the Palestinians that their lands “are owned by the state,” and will soon be used for military training.