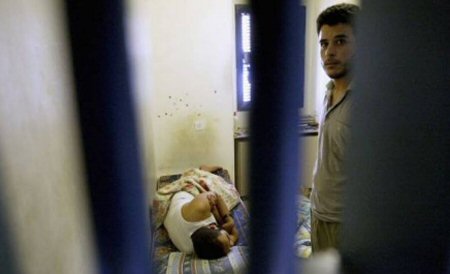 A number of Palestinian detainees filed a complaint with the Detainees Committee, against Israeli Prison Services, for offering them dirty water while under interrogation at Jalama detention center.

He said that the dirty water that he drunk caused  pain in his two kidneys, but the IPS did not pay attention to his suffering and neglected his health condition.

According to Al Ray Palestinian Media Agency, the Commission revealed cases of illness in the detention, including that of detainee Hamad Barghatha, aged 23, from the village of Deir Abu Mash’al, in the Ramallah district, whose health condition deteriorated after he waged a hunger strike, last year.

The detainee also suffers from a lack of oxygen, which causes severe pain in the head and lack of sleep. In many cases, he will suffer from fainting. IPS gives him only painkillers.

Mohammed Zaghloul, a resident of Ramallah who is sentenced to 20 years in prison, complained of the effects of being beat by Israeli forces following the storming of Section 15,  10 days ago .