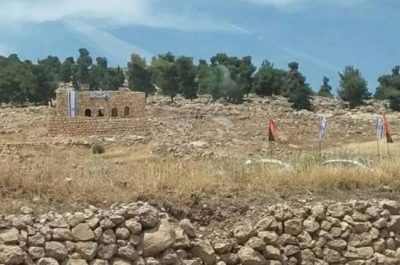 A group of extremist illegal Israeli colonizers, living on Palestinian lands in the southern West Bank governorate of Hebron, occupied on Wednesday evening an archeological Palestinian home in Doura city, south of Hebron.

Media sources in Hebron said the colonizers invaded Ein ad-Dalba area, near the eastern entrance of Doura, and occupied the archeological home, owned by al-Harbiyyat family, and raised Israeli flags on the property and around it.

Israeli soldiers were deployed in the area, and did not attempt to remove or stop the invaders, but instead prevented the Palestinians from entering the area.

The head of “Kan’aan’s Sons Society for Heritage Conservation” Yousef Nassar, said there are many ancient and archeological homes extending on the main road between Hebron city and its southern areas, and are all a constant target by the illegal Israeli colonialist settlers.

He added that the family has the official deeds proving ownership of the property, dating backing to the Ottoman era.

In related news, Israeli soldiers abducted, on Wednesday evening, Luay Hani Sultan, 20, from al-Boweira area, east of Hebron, after repeating beating him up.