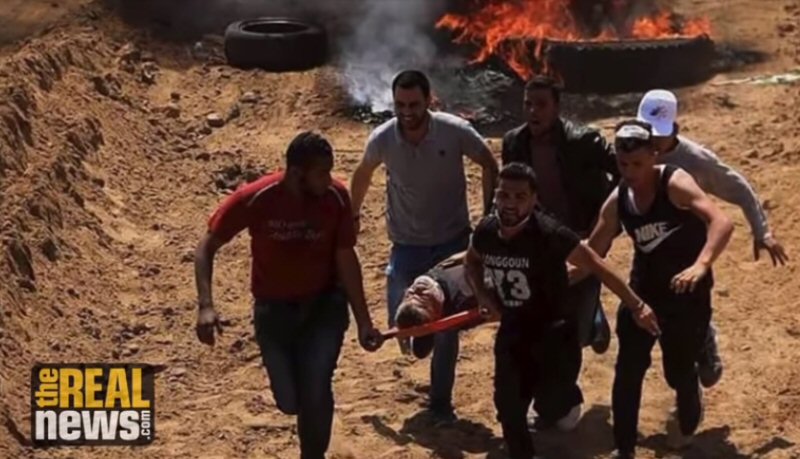 The Israeli military killed over 60 and wounded over 2,000 Palestinians protesters in one day, as Ivanka Trump and Jared Kushner opened the US embassy in Jerusalem. Journalist Ali Abunimah says the Trump administration is misleadingly pointing the finger at Hamas to distract from Israel’s crimes.

The Israeli military’s repeated slaughter of unarmed Palestinian protesters in the illegally besieged Gaza Strip has escalated even further. At least 60 Palestinians were killed, and a staggering 2200 more were injured in a single day of bloody repression of protests on Monday, May 14. Shocking video showed Israeli snipers intentionally firing indiscriminately at Palestinian civilians, shooting to kill, and to permanently disable those who survive. The Red Cross said its hospitals and doctors are overwhelmed with patients.

BEN NORTON: The United Nations condemned the Israeli military’s bloody assault. And the government of South Africa, which has a long history of solidarity with Palestinians, recalled its ambassador to Israel in protest of the slaughter.

While countries throughout the world harshly condemned the Israeli massacre, however, the United States staunchly supported Israel. In fact, Ivanka Trump and Jared Kushner were in Israel, while the IDF was slaughtering unarmed protesters, in order to open the new U.S. embassy in Jerusalem. Ivanka and Jared said nothing about the ongoing massacre of Palestinian civilians, while they received blessings from a top Israeli state-backed racist rabbi who compared black people to monkeys.

Well, joining us to discuss this scandal and the Israeli massacre of Gazans is Ali Abunimah. Ali is the director and co-founder of the Electronic Intifada, and the author of several books, including his latest, “The Battle for Justice in Palestine.” Thanks for joining us, Ali.

BEN NORTON: So today we’re speaking, it’s Tuesday, May 15, and this is Nakba Day, the day in which Palestinians commemorate the expulsion, the mass expulsion of hundreds of thousands of Palestinians when the state of Israel was created in 1948. And there are more protests going on, and there are already reports of further attacks on unarmed protesters by the Israeli military. Do you think today will be even bloodier, and can you respond?

ALI ABUNIMAH: Well, it, so far it hasn’t been. It’s already evening in Gaza. But it’s been a day when people in Gaza have been absolutely stunned by the scale of the bloodshed. There have been dozens of funerals, including the funeral of an eight-month-old baby who the health ministry said died from tear gas inhalation, because the Israelis fired tear gas hundreds of metres into Gaza at the area where families are camped out. And the death toll has continued to rise. At least two, and I think three, more deaths were announced today. And at least one person was killed today as Israel continued its attack on unarmed protesters.

I think one thing to emphasize also is the scale of the catastrophe hitting the health system in Gaza. This is already a health system that has been badly degraded by 11 years of Israeli siege, and no electricity to run life support systems for much of the time. Severe shortages in medical supplies. And then literally thousands of gunshot wounds. A doctor on I saw on Twitter, an American surgeon, made the point that there is no hospital even in the United States that would be able to deal with this level of mass casualties. That there would be emergency plans activated to move, to do triage and move injured people to other hospitals, or even other states or regions. But there is no capacity to do that in Gaza.

So the, the, the utter horror continues in this, in the sense that people, you know, are injured, and the capacity to treat them and deal with horrific injuries is very, very limited.

BEN NORTON: Yeah. And then can you speak more about the other forms of injuries? You’ve mentioned that thousands of people were shot just yesterday alone. There were reports of several hundred people being shot. And then of course this is six weeks of continuous massacres.

ALI ABUNIMAH: Actually, more than a thousand people, almost 1400 people, were shot with live ammunition just yesterday, and that’s on top of thousands previously. And what the medical, the doctors and the medical charities have noted is that many hundreds of the gunshot injuries are really horrific. They, leaving fist-sized exit wounds, and bone and muscle being completely pulverized, which means that limbs cannot be saved. Lots of Palestinians losing their legs, losing limbs, and will have lifelong disabilities. And it appears to be the case that the Israelis are using exploding or fragmenting bullets, which are banned by international law. They’re banned by multiple treaties because of the horrific injuries that they cause. But they appear to be using them deliberately to cause life-changing permanent injuries. So it’s really, it’s really just horrific. It is true horror.

BEN NORTON: Yes. And then, of course, the response from the U.S. has been outrageous and has been condemned by the international community. When asked about the Israeli massacre of unarmed protesters in Gaza, the White House Press Secretary Raj Shah avoided the question, and instead he pointed his finger at Hamas.

REPORTER: To be clear, does the U.S. not agree with the French that Israeli authorities should exercise discretion and restraint?

RAJ SHAH: We believe that Hamas is responsible for what’s going on.

REPORTER: So there’s no responsibility beyond that on the Israeli authorities. Kill at will.

REPORTER: People were throwing rocks 50 meters from the wall, and were faced with sniper attack. Is the White House in denial of the splitscreen reality that’s occurring?

RAJ SHAH: Again, we believe that Hamas is responsible for this.

ALI ABUNIMAH: Well, this is the propaganda line that Israel always puts forward, is that all Palestinians are terrorists, and anyone who is killed must have deserved to die. And it’s, it’s propaganda that is designed to dehumanize Palestinians and to justify, and I would say facilitate, further killings.

And I wouldn’t also exaggerate the condemnation, Ben. Of course, the U.S. position is is predictably horrendous, but the European position has been utterly contemptible. I would say depraved. The European Union has refused to condemn this, week after week. They’ve continued, also, to pretend that somehow there is fault on both sides when not a single Israeli has been injured.

The European position deserves as much condemnation as the United States. And the only countries that have taken some diplomatic measure are South Africa, which withdrew its ambassador, and Turkey, which withdrew its ambassador today and called for three days of national mourning. And surely those those steps are welcome, but they have to be only the beginning of concerted international action to hold Israel accountable and stop these massacres. And what Palestinians have demanded is an arms embargo on Israel, as well as other forms of accountability. But so far we have seen absolutely no moves by the so-called international community to hold Israel accountable. So we cannot be satisfied with words, Ben even if they amount to harsh criticism. We need to see action. And in the absence of any action there has to be popular reaction in the form of boycott, divestment, and sanctions.

I was just in Dublin a couple of days ago for the Palestine Freedom Conference, and we were addressed by Micheal Mac Donccha, the Lord Mayor of Dublin, who was recently banned by Israel. And he gave a really strong speech, and called for Ireland to support fully the Boycott, Divestment, and Sanctions movement, including boycotting next year’s Eurovision song contest, which will be hosted by Israel. So that’s what has to happen. It has to come up from the grassroots. If national governments won’t act, then people need to push their local councils, their cities, their states, whatever it is, their trade unions, their churches to take action, and together to put pressure on governments to end their complicity with these massacres.

It’s, for Palestinians, let me just say, Ben. For Palestinians, you know, we talk about Nakba Day as a day of commemoration, a day of looking back in history. But honestly, I don’t know any Palestinians who have been doing a whole lot of looking back at history, because we cannot cope with the current traumas with the current massacres, let alone to look back at the ones 30 years ago in Lebanon, in Sabra and Shatila, or 50 years ago in, in the West Bank, or 70 years ago when the, the Nakba happened. The Nakba has never stopped for 70 years. We continue to see a daily Nakba. And we ask, for how many more years will this go on? Palestinians cannot wait another 70 years for justice, for this horror to end.

BEN NORTON: Well, unfortunately we’ll have to end our discussion there. Thanks so much for speaking with us, Ali. Ali is the founder and the director of the Electronic Intifada, and the author of several books. It’s always a pleasure to have you on the Real News.