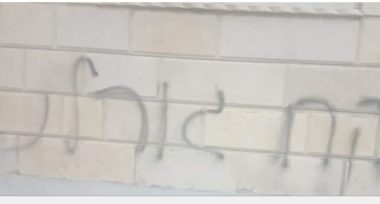 Palestinian owned vehicles were damaged on Thursday near the intersection of the illegal Yitzhar settlement, south of Nablus, in the occupied West Bank. Ma’an News Agency reported that illegal Israeli colonialist settlers threw rocks at Palestinian vehicles, and eyewitnesses said Israeli military checkpoints were erected in many areas of the district of Nablus. There, numerous Palestinians were subjected to extensive searches of their vehicles, and inspection of identification.

The additional checkpoints were supposedly in response to an attack on soldiers at the Huwwara checkpoint earlier on Thursday.

On Wednesday a group of illegal Israeli colonialist settlers invaded the village of Quryout, south of Nablus. The settlers, from a nearby settlement, in the southeastern part of Qaryout, punctured the tires of nine Palestinian cars, and wrote racist graffiti on Palestinian property. Ghassan Daghlas, a Palestinian official monitoring Israel’s colonialist activities, stated that the settlers fled the village shortly after the incident. According to International law,  all of the Jewish-only settlements built in occupied Palestine are illegal.

In a related incident on Wednesday, Israeli settlers invaded a high school in Urif village, in the southern Nablus district. The illegal colonialist setters threw stones at the students, while they were in class, causing injuries, disruption of classes, and damage to the school. Ghassan Daghlas told Ma’an News Agency that 18 heavily armed settlers were escorted out of the vilage by Israeli military, who protected the settlers, while firing tear-gas bombs and rubber-coated steel bullets at the students.

These attacks caused the disruption of education, injury by tear-gas inhalation, and property damage.