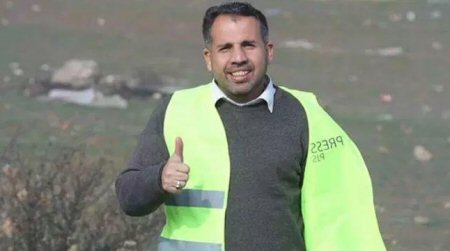 Imprisoned Palestinian journalist and director of Al-Quds TV Alaa Rimawi said on Sunday, 19 August that the arrests carried out by Israeli occupation forces against Palestinian media and journalists are part of a comprehensive attack on Palestinian media, preventing it from doing its work and minimizing its role in publicizing Palestinian realities.

In a statement released by his family and lawyer, Rimawi said that this agenda was clear during the interrogation sessions he was subjected to personally in the past two days. He also noted the cases of journalist Ali Dar Ali, arrested by occupation forces, and the administrative detention of journalist Mohammed Muna, saying that these attacks reflected the same purpose.

Rimawi said in his statement that the occupation considers terms like “martyr,” “occupation,” “steadfastness,” “confrontation” and “resistance” to be “inciting” content. He also noted that the arrests of journalists is meant to keep the situation in Palestine from being covered in the media. “The occupation is carrying out a policy of intimidation with its police and intelligence services. This is clear and obvious, bringing forward the names of journalists to continue these detentions, a threat against every free Palestinian journalists.”

Occupation arrests of Palestinian journalists like Dar Ali, Muna, Lama Khater and others, and the forcible closure of media institutions by military bodies have escalated recently, under various pretexts and charges.