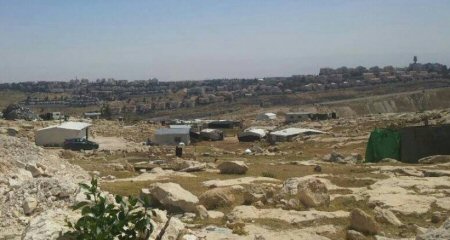 The Palestinian Center for Human Rights (PCHR) condemns the Israeli Government’s decision to evacuate Palestinian Bedouin population from the Pope Mountain Community in al-Ezzariya village, east of occupied Jerusalem, for the interest of settlement projects in the area.

At the time PCHR emphasizes the legal status of East Jerusalem as a city under occupation, PCHR stresses that these Israeli measures are part of the Israeli government’s plans to create a Jewish Majority in the occupied city, expand its administrative boundaries, and connect its settlements established in the east of Jerusalem with the city in order to cut off communications between the north of the West Bank and its south. PCHR calls upon the international community to take immediate action to stop implementing this serious plan and end all settlement activities in occupied Jerusalem.

According to PCHR’s investigations, late on Thursday evening, 16 November 2017, Israeli forces accompanied with staff of the Organization and Construction Department in the Israeli Civil Administration moved into the Pope Mountain Bedouin Community near al-Izzariyah village, east of occupied Jerusalem and adjacent to “Ma’ale Adumim” settlement, and fixed orders to evacuate the houses and leave the area as a preamble to displace them.

‘Attalla Mazar’ah, Head of Services Committee in Pope Mountain Community, said to PCHR’s fieldworker that the Community residents, comprised of 57 families, including 320 individuals, half of them are children, were surprised with the Civil Administration staffs under the Israeli forces’ protection moving into the area.

The staffs installed iron rods in the ground and fixed military orders along with maps. ‘Attalla mentioned that the Pope Mountain has been targeted by the Israeli forces because its residents live within the E1Settlement zone.

The area is inhabited by Palestinians from Arab al-Jahalin, who arrived at the area following their displacement from Negev in 1948. It should be noted that this order was signed by the military commander of the area on 01 November 2017.

The distribution of these military orders came few hours after the Israeli Prime Minister’s decision, Benjamin Netanyahu, ordering the Palestinian Bedouins living in communities to evacuate their houses in the vicinity of occupied Jerusalem, near Street No. (1), moving towards the Dead Sea.

The Israeli media stated that the decision was issued on Thursday at the end of a meeting held between Benjamin Netanyahu and representatives of so-called “Jerusalem Perimeter Forum” and the Binyamin Regional Council. The Israeli media clarified that the meeting was about the tents and mobile dwellings inhabited by the Palestinian Bedouins in Palestinian areas overlooking Jerusalem between ” Ma’ale Adumim” and “Mitzpeh Yericho” settlements, which were classified as “illegal outposts” by the Israeli authorities.

PCHR condemns the Israeli forces’ attacks against this Bedouin community and other Bedouin communities in the vicinity of Jerusalem. PCHR also believes this attack is part of the forced displacement crimes committed by the Israeli forces in areas classified as Areas C according to the Oslo Accords signed between the Israel Government and Palestinian Liberation Organization on 13 September 1993, in favor of settlement expansion projects.

PCHR reminds the international community of the Israeli forces’ violation of the 1949 Fourth Geneva Convention relative to the Protection of Civilian Persons in Time of War, in particular Article 33, which prohibits collective punishment, and Article 147, which stipulates that extensive destruction and appropriation of property are not justified by military necessity and carried out unlawfully and wantonly and are grave breaches amounting to war crimes according to Article 85, paragraph 5 of Additional Protocol I to the Geneva Conventions. Moreover, these crimes are a violation of Article 11 of the International Covenant on Economic, Social and Cultural Rights, which stipulates that the States Parties has an obligation to ensure each person’s right to an adequate standard of living for him and his family, including adequate food, clothing and housing.