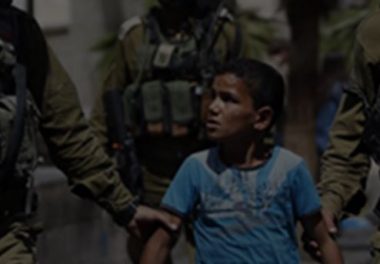 Marking the World Children’s Day (November 20th) the Palestinian Central Bureau of Statistics (PCBS) has reported that Israeli soldiers have killed 14 Palestinian children since the beginning of this year, while 300 children are still imprisoned by Israel.

It said that, according to statements and official data by the Palestinian Detainees’ Committee, Israeli soldiers have abducted 15000 Palestinians, including 4000 children, since the al-Quds Intifada started in late October 2015.

The PCBS added that Israel was still holding 300 children captive, facing bad treatment, torture and constant violations, spending their childhoods in prisons, without even the right to education.

It quoted detailed data and statistics by Defense for Children International (DCI) confirming that Israeli soldiers have killed 14 Palestinian children, since the beginning of this year, until October 31, compared to 35 children killed by Israeli fire in 2016.