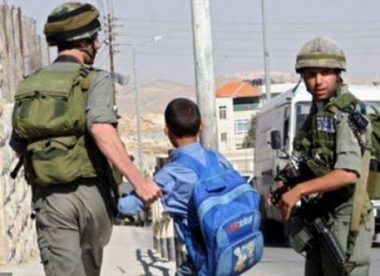 Media sources in Hebron, in the southern part of the occupied West Bank, said the soldiers stormed and ransacked homes in Beit Ummar town, north of the city, and abducted two teenagers and a child, identified as Malek Bassam at-Teet, 18, Bashar Mahmoud at-Teet, 18, and Mohammad Bassam Ekhlayyel, 14.

They added that the soldiers also invaded homes in Hebron city, and abducted a young man, identified as Majdi Motawe’.

The three are students of the eleventh and twelfth grades, in a local school in Deir Nitham village, northwest of Ramallah.

It is worth mentioning that the students are forced to cross the roadblock every school day, at least twice.

In addition, the soldiers abducted Aseed Mohammad K’eiba, 25, from Ezbet al-Jarad village, east of Qalqilia, in northern West Bank, after invading his home and violently searching it.

The soldiers also invaded and ransacked many homes near the Courts Compound, in the Western Neighborhood, in Tulkarem city.