In Suspected Preparation for Strike on Gaza, Israel to Hold Largest Aerial Drills Ever 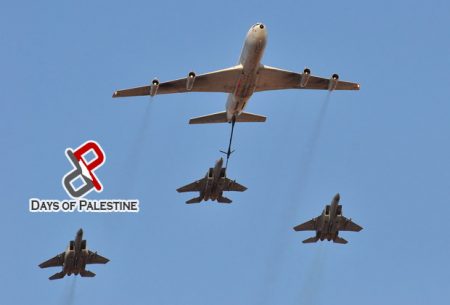 Likely preparing for another deadly offensive on Gaza, the Israeli air force is preparing for the largest ever and most complex military drills ever held, later this year.

According to Israeli public radio, about 100 fighters, other aircraft and a few hundred soldiers and pilots, along with logistical support forces from the United States, Greece, Poland, France, Germany, India and Italy are expected to participate in the military exercise.

Israeli radio said, according to Days of Palestine, that the air force squadrons will meet in Tel-Aviv during autumn, to carry out these joint exercises, for to maintain the readiness of the forces from the participating countries.

Over the course of two weeks during the exercise, pilots will train to fight air battles, hit ground targets and avoid missiles.

Lieutenant Colonel Richard Hecht, the Israeli Air Force’s chief of international affairs, said: “It will be a massive exercise; the biggest ever for the IAF. Seven nations plus Israel.”

He added: “People are seeing there is a lot to learn from Israel. In our tiny airspace and in the environment around us, things are so intense. The Russians are here… many of the world’s air forces are passing through here on their way to operations in Syria and elsewhere in the region.

“So, we provide a sort of battle lab in which forces can hone a spectrum of skills needed to combat growing threats.”

He explained that the so-called Blue Flag exercises would focus on cooperation, rather than competition, between the participating air Forces, as opposed to the Red Flag maneuvers organized by the US Air Force each year, at the Niles Air Force Base in Nevada.

Early this week, Israel called up 2,000 reserves and carried out large drills near the eastern borders of the Gaza Strip.

Monitors insist that these massive and continuous drills likely come in line with Israeli efforts to prepare for a massive and deadly attack on the Gaza Strip.