Flaming Kites Cause Fires in Bordering Israeli Communities near Gaza 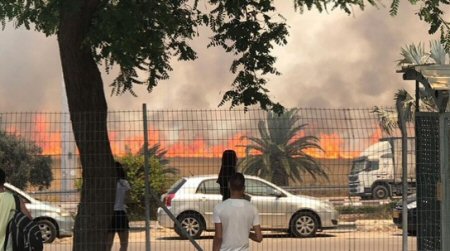 Ynet reported, according to Ma’an, that more than 10,000 protesters took part in “The Great March of Return” across the besieged Gaza Strip on Friday, pointing out that the Israeli army deployed more forces at the borders.

One Palestinian was killed by Israeli forces during protests on Friday, and more than 300 others were injured.

In July, it was reported that about 6,000 dunams (1482.6 acres) of agricultural produce, as well as thousands of dunams of open fields, were burned due to about 678 fires caused by flaming kites and balloons flown from inside the Gaza Strip.

However, Palestinians in Gaza view the kites as a form of protest against Israel’s nearly 12-year blockade of Gaza, and for Palestinian refugees’ right of return to their homes and lands which are now known as Israel.