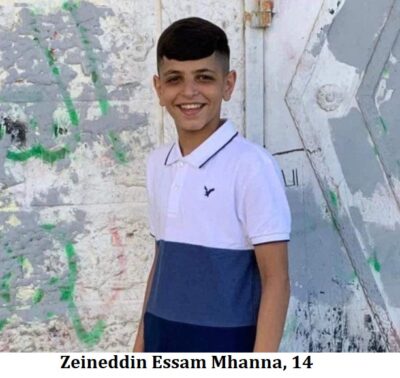 On Sunday at dawn, Israeli soldiers abducted at least eleven Palestinians, including a child, from their homes in several parts of the occupied West Bank, including the occupied capital, Jerusalem.

Also, the soldiers abducted Haidar Emad Nashashibi after invading and searching his home in Jerusalem city.

It is worth mentioning that, on Saturday night, a young Palestinian man, identified as Ahmad Samir Obeid, was transferred to the al-Makassed Hospital In Jerusalem after Israeli colonizers attacked him and maced him with pepper spray while in his car in Sheikh Jarrah neighborhood.

The colonizers also maced several Palestinians, including children, in the neighborhood before the wounded received the needed treatment by local medics.

Silwanic also said that the army abducted a child, identified as Zeineddin Essam Mhanna, 14, after the soldiers stormed and searched his home in the al-Isawiya town in Jerusalem, causing damage.

In addition, several army jeeps invaded the al-Ram town, north of Jerusalem, before the soldiers searched and ransacked a few homes and abducted a young man, identified as Husam Satafee.

In Nablus, in northern West Bank, the soldiers invaded and searched many homes before abducting Adnan Salah and Ibrahim Hassouna.

Media sources in Nablus said Hassouna was interrogated for a few hours before the soldiers released him.

The soldiers also abducted Adnan Khaled Salah, from Jenin, in the northern West Bank, while walking in the Rafidia area in Nablus city, and searched at least one home, in addition to invading many neighborhoods and closing a few streets.

Furthermore, many army jeeps invaded the southern area of Hebron city, in the southern part of the West Bank, before the soldiers invaded and ransacked the homes of Zeid Ja’bari, Faraj Hussein, and abducted Zeid.

In Jenin, in northern West Bank, the soldiers installed a military roadblock at the entrance of Zabbouba village, west of the city, before stopping and searching dozens of cars, and interrogated the Palestinians while inspecting their ID cards.