Including A Teenage Boy And His Mother, Israeli Soldiers Abduct Four Palestinians In Hebron 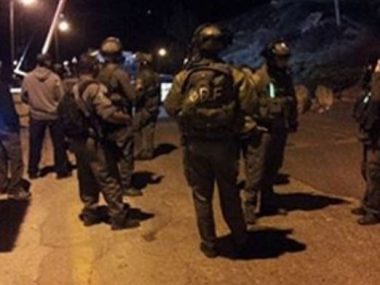 Israeli soldiers invaded, earlier Tuesday, Yatta, Doura and ath-Thaheriyya towns, in the southern West Bank district of Hebron, searched many homes and abducted four Palestinians, including a teenage boy and his mother, and a legislator. The soldiers also confiscated a bulldozer and a truck.

In addition, the soldiers broke into the home of legislator Mohammad at-Till, in the ath-Thaheriyya town, also south of Hebron, and abducted him, after searching his property and several nearby homes.

Furthermore, the soldiers illegally confiscated a bulldozer and a truck, owned by Wael Ali Ekhlayyel, while he was conducting initial work on a new road, meant for linking Sho’ab al-Batm village with nearby communities in Yatta.