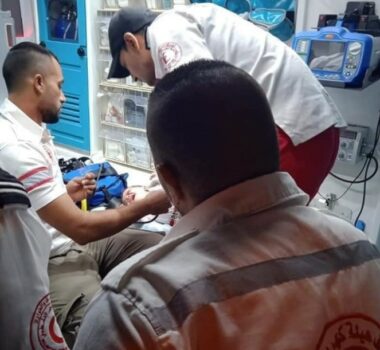 Palestinian medical sources have reported, on Thursday evening, that an infant girl, only four months of age, was among many Palestinians who suffered the effects of tear gas inhalation after Israeli soldiers invaded Ya’bad town, southwest of Jenin, broke into homes, and attacked protesters.

Local sources said the soldiers invaded the town, before storming and ransacking several homes in the Abu Shamla neighborhood, and interrogated the families, in addition to inspecting recordings of surveillance cameras.

They added that the invasion led to protests before the soldiers fired a barrage of gas bombs, concussion grenades, and rubber-coated steel bullets at the protesters and surrounding homes.

Many Palestinians suffered the effects of tear gas inhalation, among them an infant, identified as Sila Sami Abu Bakr, only four months of age, before medics of the Red Crescent Society provided them with the needed treatment and transferred the infant to a hospital.

In related news, the soldiers attacked Palestinian protesters near the al-Jalama military roadblock, northeast of Jenin, and invaded several villages and towns in the area.